Prayer was essential to Jesus’ way of life. It was always nourished by filial conversation with his Father (Luke 6:12). Imitating him a nun gives witness in the Church to a life of unceasing heartfelt prayer. Since prayer is “an intimate sharing between friends, a frequent lingering in solitude, with him who we know loves us”, it involves every aspect of the nun’s being. As a consequence, prayer is the first priority in the life of the monastic community and in the personal commitment of every nun. As St. Teresa stated, the prayer without ceasing is a foundation of the nun’s life and her primary activity. 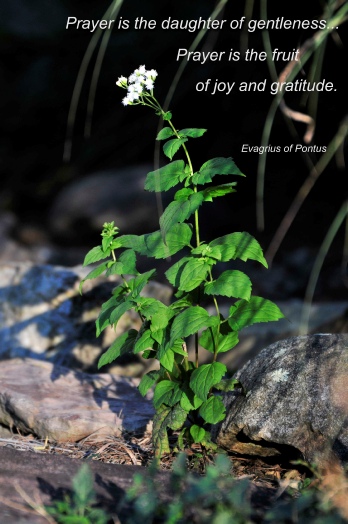 “Faith is the doorway to the mysteries.
What the eyes of the body are for physical objects, faith is for the hidden eyes of the soul. Just as we have two bodily eyes, so we have two spiritual eyes, and each has its own way of seeing. With one we see the glory of God hidden in creatures: with the other we contemplate the glory of God’s holy nature when He deigns to give us access to the mysteries.”

“This should be the monastic’s goal and object of all his (her) efforts: to merit to possess already in this life and in his (her) mortal body a preview of future blessedness and a foretaste of the glorious life of heaven. Such, I repeat, is the summit of all perfection, when the soul is so free of carnal attachments that it can rise daily to the lofty realms of the spirit, until its whole life and every stirring of its heart becomes one continual prayer.”   ~ John Cassian 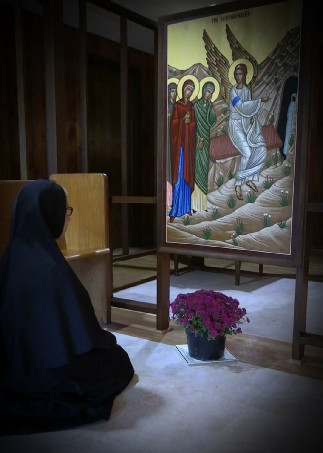 “Do not separate yourselves from God, nor let your heart be separated from God,

is planted firmly in your heart, and nothing else,

until such time as Christ is magnified in you.”

The early monks did not flock to the desert to pursue chimeras and to live in misery, nor even simply to immolate themselves for the glory of God, but in order to concentrate all their inner powers on the achievement of a single goal, the love and service of God. They tried to free themselves from the innumerable worries that can eat away all spiritual vitality at its roots, and they tried to have instead one sole concern, that of attaining a state of total interior integration and wholeness which is literally health or salvation, the well-being and joy that comes from living for the greater honor and glory of one’s Maker.”